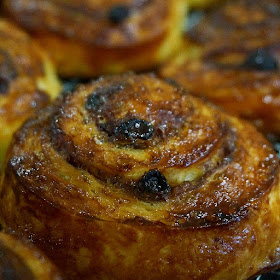 After a few attempt on making croissant. I was tempted to try out others flavoured Danish pastry and the first pastry came to my mind is cinnamon roll which are always looks mouth watering display in any artisan bakery shop. Cinnamon roll is one of the top selection pastry on my diet. Yes, they are fattening so we try not to have it too much but when we eat, we must  eat the best and number 1 pastry to worth the calorie that we gain. What an excuse? but that's my rules of diet when come to enjoying food.

Using the same recipe of croissant, I came out with my first Danish Cinnamon roll. This time it's even better as after few times of practising  on the pastry making, I have much confidence as well as things seems to goes smoother during the process. 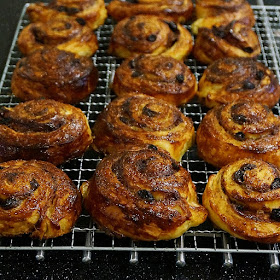 This cinnamon roll unlike the cinnamon buns or rolls that I was making previously. Those were made from bread flour and didn't contain so much fat which more on bread texture. Whereas Danish pastry cinnamon roll is very buttery,  soft, flaky and a little chewy.

This cinnamon roll is something that can be shared with everyone. It's as good as those stall bought or even better. It smell wonderful when they are almost done from the oven. I couldn't resist and ate two in one go when they had still a little warm on the cooling rack. 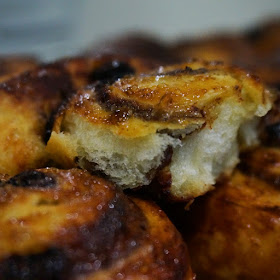 Danish pastry are always best to eat while they are freshly made especially this cinnamon roll. The first batch I made yield 16 pieces. Then, the second time I made, I bake 8 pieces and keep the other 8 pieces unbaked. I kept them in the freezer until I need them again. Simply defrost them at room temperature and let them proof and rise again. There, I got freshly baked cinnamon roll again.

Till here, I will make this repeatedly  to feed my guinea pigs on every weekly cell group gathering and before that, one will goes to my mouth first hahaha...

Roll out a ready made pastry into 24  x 10 inches. Brush some water on the surface then sprinkle the cinnamon mixture all over the pastry evenly. Place raisin or sultanas or any nuts. Roll up the pastry and seal tighthly.

Cut them into 16 equal portions and place on a baking pan attached with baking paper. Brush the egg glaze and let them proof for 2 hours at room temeprature.