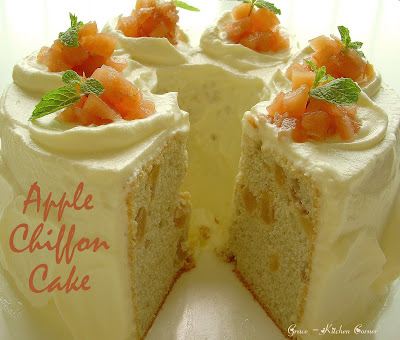 Here is my second attempt on apple chiffon cake. I've made a 17cm and a 22cm round chiffon. It took some time to made this cakes as the apple need to be cooked first before making the cake. I bought few apples that came with very red skin to produce a lovely pink color for the cooked apple. 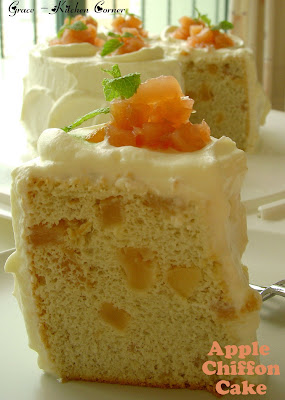 Most of the chiffon cake I've been making consist of corn flour. I followed a recipe book named "戚枫蛋糕秘法转授". I think it's the best chiffon recipe book I had so far. The book stated that adding some corn flour in the egg whites will absorb the liquid of the egg whites in order to stabilize the meringue and produce a special texture. I guess its chemical reaction is quite similar with cream of tartar or lemon juice. I like the recipe because it don't consist of chemical element such as baking powder or cream of tartar but just the ordinary ingredients like egg, water, oil, flour, sugar and natural color from fruits or vegetables. 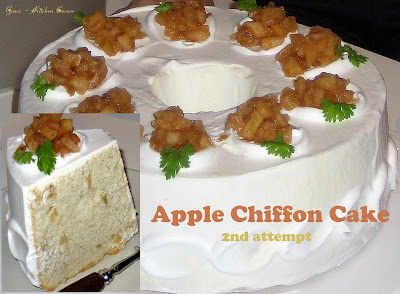 Hi Grace,
Your chiffons are very nice, unlike mine. *swee swee* leh! Keep up the beautiful works! I shall try it one day. Btw, what is the recipe book in English? Thanks.

Hi Jane,
Thanks! It's a chinese version recipe book traslated by Taiwanese from Japan author. I bought it from taiwan years ago. You might be able to get it from Kinokuniya bookstore.

Hello, do you have the recipe In roux method for chiffon ?