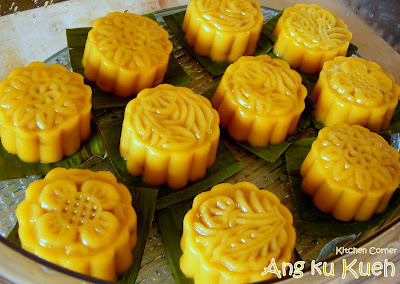 My first attempt on making nyonya kuih which I never think of doing it before as I could easily get a better texture kuih from Bangawan Solo. Anway, all because I've leftover some coconot fillings for the honey coconut buns, so I was struggling how to finished it until I've got the idea from some of the bloggers. 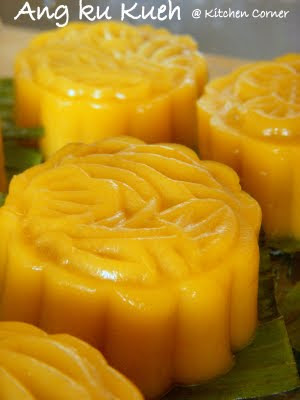 At first, I would like to make Ang Ku Kueh, but I don't have the mold so I used a mooncake mold. Secondly, I found out that coconut fillings actually is use for Kueh Koh Chi. Finally, I came out with a combination with three different things. Chinese said "不三不四" or "四不像". The first glance look like snow skin mooncake, but the real skin actually is Ang Ku Kueh then the fillings is Kueh Koh Chi fillings hahaha... very confuse. Anyway, when I eat it, it's more like Ang Ku Kueh. I couldn't believe that is my first kueh making and the skin turn out so soft and stayed soft on the next day. The orange color from the sweet potato is quite pretty for me. That's nice when we could get the natural color in baking. The fillings of course go so well with the skin, it's yummy! All thanks to Florence sharing the fantastic recipe. I can't wait to make more for my friends and family. 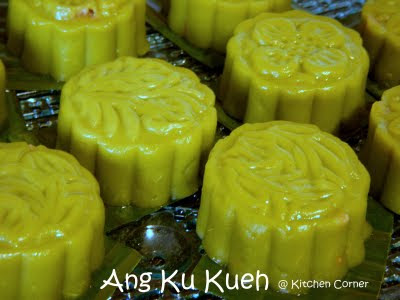 After the first attempt, I tried the second batch using plain color sweet potato with pandan juice for the green color. It's turn out as nice as the first batch. Very satisfy! 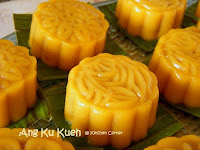 I used the same recipe for making ang koo kuih skin, too!! It was really nice ... soft and chewy! But, I actually have never seen ang koo kuih with coconut filling. Very common in Singapore??

How creative you are to use mooncake mould to do this, they look just nice and wonderful. Thanks for sharing this lovely recipe.

Hi Grace,
Oh wow! My initial thought when I saw the pictures was - did you name it worngly or not? It's a mooncake! Hahaha... I see, it's an enlarged ang ku kueh. The texture of the skin looks really nice and shiny. The fillings looked rich too! I think one will be enough to fill the tummy ya? I would really like to try one! Very interesting colours you've made them too! :)

Hi Grace,
U got me 'confuse' with your header and first picture too! They do look soft and tasty...yummy yummy ;-)

You are such a skillful and talented baker. Your first attempt always turned out to be as perfect as those made by experienced professional bakers. Well done!

How pretty! I can t beleive it s your first attempt. They re perfect!

Wow, cool! Mooncake mould ang ku kueh! So pretty too! Great job Grace...love to try one if I can. :)

Hi Pei Lin,
I've never seen angku kueh with coconut filling in Singapore too! I find out that is quite a good combination :)

Hi Sonia,
Actually there are many bloggers using this mooncake mold to make kueh too. I just followed them. That's really a good idea! Cheers!

Hi Jane,
Hi Food For Tots,
Yea, it's quite confuse at first :) My hubby thought it's mooncake too! Since I don't know how to make mooncake, can use kueh to replace with a mooncake mold? kekeke...

Hi Snooky doodles,
Hi Honey Bee Sweets,
Thanks for your compliments. First I thought angku kueh is hard to make, after this attempts, I think I could manage to make it. Cheers!

Hi quizzine,
haha.. yea it's quite confuse at first. Anyway, this kueh really soft and go so well with coconut fillings. Please try it. Cheers!

Wow, when I first see the pictures I thought it's mooncakes. I will try this when free.

This is a very interesting fusion & it shows how creative you are! They look really pretty!

I tried yr receipe for 1st attempt also. they turned out soft but pattern can't be seen cleary.
colour is not orange like yours. do I have to add some orange colourings?

Hi Esther,
I heard that steaming too long or high heat will distroy the flower pattern from the skin. I didn't use colourings for this recipe. I used sweet potato in orange color.

Am I too late to post a comment here ?
Just trying my luck if I can still get a reply coz this article is dated many years back.

To get the orange color, I have to buy Orange Sweet Potato?

Any exact name for it? In Chinese also can?