The smell of cinnamon is really good, it goes very well with some desserts. One study found that the smell of cinnamon gives you a clear of mind. No wonder I always feel so good with the smell :) Cinnamon roll is one of the best breakfast and afternoon tea served with a cup of coffee... urhhhh... that's the most enjoyable yet relaxing moment. 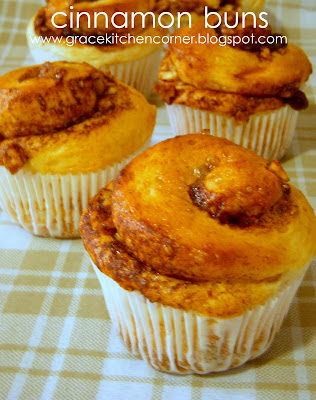 I baked these cinnamon rolls into buns shape by baking it on a muffin pan. They looks like quite happy sitting on the muffin pan! Other than adding the raw sugar with cinnamon powder, I gave it some extra texture. 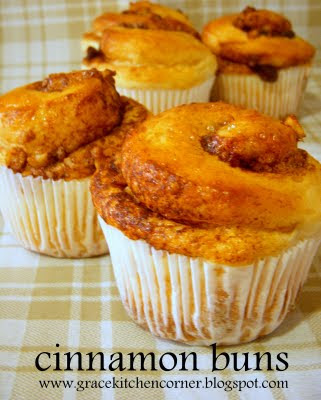 The buns was added with some honey toasted walnut and raisins soaked with rum. The texture is very nice with a bit of crunchy nuts and chewy raisins. Not to forget, the smell of cinnamon with the raw sugar is a winner! 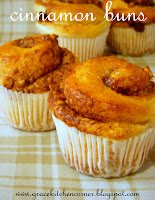 Ingredients:
(A) 210g bread flour / 56g plain flour / 20g milk powder / 42g sugar / 1/2 teaspoon salt / 6g instant yeast
(B) 30g eggs / 85g water / 84g water roux (refer to water roux recipe)
(C) 22g butter
(D) 30g raw sugar / 1 tablespoon cinnamon powder / 40g raisin (soak with rum / 40g honey toasted walnuts
Recipe for the water dough "water roux": Cook 125 water with 25g bread flour at medium low heat, keep stirring until it become thicken and no lumps left (please don't over cooked it!). If you've a candy thermometer, measure it until the temperature turn to 65C then turn of the heat. I didn't measure it with thermometer, so I cook it until like a baby porridge. Transfer to a clean bowl and cover with a cling wrap to avoid skin forming. The amount of water roux here would be more than a recipe required, please according to the amount of the recipe required and do not add more or less.
How I made it:
Email ThisBlogThis!Share to TwitterShare to FacebookShare to Pinterest

I love the buns you baked more than mine. Such a good idea baking them in the muffin tray, I will try this out some day. I just soak my raisins with some warm water, thanks for sharing the idea of soak them in RUM.., yum yum..that's must be yummy!! but, can kids take this?

I love the sweet fragrance of cinnamon , your buns look so delicious that I can eat a few at one go , thanks for sharing.

great idea, bun in the muffin tray, will try out in one day, Thanks for sharing.

Yours look just as yummy!! I guess we were on the same track because I just made a loaf of wholemeal cinnamon swirl loaf & nine cinnamon rolls with rum-soaked raisins & chopped walnuts added in this past weekend, too!! Gosh! LOL!

But, I've not found the chance to blog about them though because I'm very slow at blogging hahaha ...! Keep it up! I love your work!!!!! =)

Hi Grace,
My my! I love cinnamons too! Cinnamon apple, cinnamon buns, cinnamon orange cake...anything cinnamon, and yes, cinnamon stick in gourmet coffee! Usually for cinnamon buns, we only add some walnuts. However, you have honey-toasted walnuts and rum-soaked raisins too!! Goodness, this bun will be soooooooo good! I must do this this weekend...trust me, I will. Thanks very much for the recipe...Ooh...can't wait to have this for my breakfast, lunch, tea-break and dinner too! Hahaha...

Hi TINTIN,
I'm sure you have a very tasty cinnamon buns too! As I know, cinnamon really a good ingredients for our baking :)

Hi A Full Time Housefly,
Thanks! I did eat three buns in one go hahaha...the smell of cinnamon is the best!

Hi Moni,
I'm sorry I really don't know how to translate English to your language. Can you please ask someone to help you? So sorry!

Hi Sonia,
Thanks! I think place them in the muffin tray would be much neat and tidy. Hope you like it, cheers!

Hi Pei Lin,
Oh.. there are few of us making cinnamon buns. Wow... that's great as you will understand how nice the smell is :P

Hi Jane,
I think both of us really like it. Hope we can have the bun together with cup of coffee ok. Cheers!

Nice delicious looking buns! Good that you didn't add sugar icing...that would be too sweet and yours look perfect. ;)

Ur cinnamon buns look very good, they are like muffin. :)

I like cinnamon buns/rolls alot esp when serving hot. With ur description I am sure the buns taste heavenly.

Hi Honey Bee Sweets,
Ya, I think better not to add sugar icing as the buns are good enough with the raisins and walnuts and the cinnamon :)

Hi Cook.Bake.Love,
Thanks! Yes, it taste very good when it's warm. Hope you like it!

I too feel that smell of cinnamon just is so invigorating...I am going to try this one soon...but I am not sure what exactly is bread flour and how does it differ from the plain flour...can you help me with that please!
In love with eating and cooking - the pics on your blog build my appetite!

Hey there. You didn't state what should we do with the ingredients in (B). If i'm wrong my bad then. :)

Hi Lili,
Sorry that there is some typo error. Please knead the ingredient (A) and the water roux that made with ingredient (B).

Hi Grace,
I have been experimenting and researching on Cinnamon Bun for weeks now. I came very close to it, but still not to standard I would like to achieve. I really want to try your recipe, making it in a muffin form is definitely much cuter and cleaner.

Is there any substitute for the milk powder? I'm not sure where to find it.