I bought few packages of Red Mill whole grain flour from the Market Place Supermarket weeks ago. There are rye flour, wholemeal flour and 10 grain flour. I've used rye flour for a rye bread in my previous attempt whereas wholemeal flour had been used for wholemeal bread or pancakes. 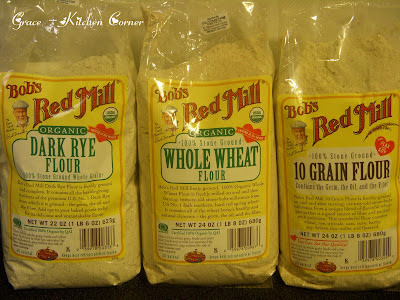 Yesterday, I tried to make another loaf with the 10 grain flour which contains wheat, rye, triticle, oats, corn, barley, soy, brown rice, millet and flax seed. There are finely grounded grains which is quite different from the wholemeal flour I've been used for some time ago. Perhaps the dough would be much smoother. 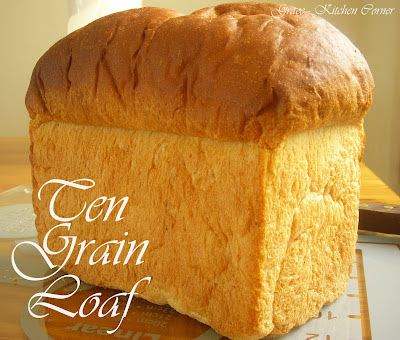 I purposely left the bread rise without a lid-on as my other half like the caramelized bread edges. Finally, it rise absolutely tall and end up we've got quite a big slice of bread. As for me, I love the outlook of homemade country loaf. 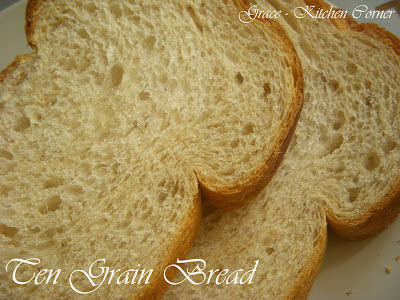 The bread texture was soft as I used a recipe which contains milk and egg. I could hardly tell what is the flavor as too many grains had combined together. Sometimes, it tasted like soy, sometimes like brown rice and sometimes barley. Well, whatever it is, it's a healthy bread. Recipe: 250g bread flour 80g 10 grain flour 30g sugar 5g yeast 3/4 teaspoon salt 1 egg 65g ice water 100g milk 30g butter
Email ThisBlogThis!Share to TwitterShare to FacebookShare to Pinterest

This is no doubt one of the most nutritious breads that I've ever tasted!

Which brand of yeast do you use? Your bread all rise so well and the texture so good. Does yeast brand matter?

Hi Mui Mui,
Every time I used different kind of yeast depends on what is available in the market. For me, any brand of yeast are the same, may be slightly different but I hardly feel the difference.